Happy Thursday everyone! I hope your week has been pleasant. Mine has gone well, except that it’s the end of July in Texas, and hotter than a two dollar pistol! I hate to wish my life away, but I’m looking forward to October. <g>

The following are the next installments in the Texas flags portion of facts and trivia.

The descriptions are used in whole or in part from, http://www.tamu.edu/faculty/ccbn/dewitt/indepenflgs.htm. All attempts will be made to give credit where credit is due.

Brown’s Flag of Independence. This flag is said to have been designed by Capt. William S. Brown at Velasco in fall 1835 preceding Capt. Dimmitt’s bloody-arm flag with which it has been commonly confused since it employs the same symbol (see Origin of the Bloody Arm Symbol). Which came first is uncertain, but it is likely that one influenced the other. This banner may have been flown by Capt. Brown and his men at the Battle of Bexar and with him when he went to Goliad after the battle where he was a signer of the Goliad Declaration of Independence. Although Capt. Dimmitt’s flag is thought to be the primary one at the ceremonial announcement of the declaration, the Brown flag was probably present and may have also been displayed. References to the fact that Brown’s flag was first unfurled at Goliad may refer to the simpler Dimmitt flag consisting of only the arm and knife on a field of white. Afterwards Brown also went to San Felipe where the banner was again said to be unfurled prior to his return home to Velasco.

There it may have been flown in front of the American Hotel on 8 Jan 1836 along with the Troutman flag of the Georgia Battalion. Author John Henry Brown (History of Texas) stated “Over the cabin in which the convention met and declared for independence, floated a flag with the design of a sinewy hand grasping a red sword, and underneath this was a lone star flag.” Mamie Wynne Cox in Romantic Flags of Texas says “As Captain Brown’s Flag was the only banner carrying a design of a bloody sword, this could have been none other than his.” Cox describes the Brown flag as a large deep blue field in the upper left corner, in which is a white arm grasping a sword fromt he point of which is dripping blood. The flag has thirteen stripes, seven red and six white with the word INDEPENDENCE in the third white stripe from the top. Author Brown’s description does not clearly describe either of the two “bloody arm” flags or the lone star flag. He appears to be referring to two flags on the same pole, although it could even have been a composite single banner. (Image adapted from Gilbert, Flags of Texas)

Dimmit’s Goliad Flag. This militant and defiant banner, designed by Goliad garrison commander, Capt. Phillip Dimmitt, dramatically reflected the political shift of Texians and Capt. Dimmitt away from support of the independent statehood of Texas in the Mexican Federalist Republic and return to the Constitution of 1824 to support of complete separation from Mexico as an independent Republic. Before he returned from the Siege and Battle of Bexar to Goliad in the middle of Dec 1835, Capt. Dimmitt was an avid Mexican Federalist and opposed to separation which was symbolized in the 1824 Mexican tri-color which is also thought to be of his own design. Dimmitt’s bloody arm flag was said to have been raised ceremonially on Dec 20 upon the signing of the Goliad Declaration of Independence as the official flag of the occasion although the banners of companies of Capt. William S. Brown and Capt. William Scott were also present at Goliad at the time.

Which banner was actually flown over the Goliad garrison is the subject of controversy and comment by historians. Mary Agnes Mitchell in First Flag of Texas Independence cites memoirs of participants John James and Nicholas Fagan “The Goliad flag was made personally by Captain Dimmitt himself….It was of white domestic, two yards in length and one in width, and in the center was a sinewy arm and hand, painted red, grasping a drawn sword of crimson…..The flagpole was made from a tall sycamore which was procured from the woods along the banks of the San Antonio River…..The flagstaff was in the yard of the quadrangle opposite the entrance to the officers’ quarters.” Dimmitt’s flag flew over the ramparts of Goliad through 10 Jan 1836 when Dr. James Grant and the Federalist Volunteers of Texas forced its removal with threat of violence and which caused the subsequent exit of Col. Dimmitt and those loyal to him from the garrison. The banner is thought to have exited with them. The motivation behind Dimmitt’s use of the bloody arm symbol is unclear as was whether he acquired it independently or simply under influence of the Brown flag which employed the same symbol (see Origin of the Bloody Arm Symbol). 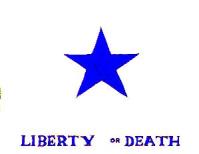 Troutman Goliad Flag. This flag was designed in Nov 1835 by Johanna Troutman, sometimes called the Betsy Ross of Texas. When the Georgia Battalion of Volunteers under Captain William Ward marched from Macon to Columbus, GA on their way to Texas in response to an appeal for aid for Texas by Col. Fannin, Miss Troutman (daughter of Col. C.A. Troutman of Knoxville, GA and later Mrs. Pope), presented the troop with the flag to carry with them. According to Mrs. Looscan, the banner was of white silk with an azure star on both sides.

On one side was the words Ubi libertas habitat ibi nostra patria est–“Where Liberty Dwells, There is my Home” in Latin, on the other side was the letters indicated. Author John Henry Brown says that the flag was flown at the American Hotel in Velasco in Jan 1836 upon the arrival of the Georgia Battalion in Texas and some have claimed it also flew at the Texas Independence convention at Washington-on-the-Brazos. However, it was said to have been taken to and flown at Goliad by Col. Fannin. Guy M. Bryan in a speech before the Texas Veterans Association in 1873 “The Georgia battalion flag was azure, lone star, five points, in white field. This flag was raised as national flag on the walls of Goliad by Fannin when he heard of the Declaration of Independence.” The flag was thought to have been destroyed in haste to get it down upon retreat from the garrison at Goliad.

I do hope you enjoy these posts and, again, if there’s any subject in Texas history you’d like to know more about, let me know. Below are links that may be of additional interest.

Hope you enjoyed the history and don’t forget to leave a comment.

I am a sixth generation Texan and member of the Daughters of the Republic of Texas. Living in the heart of the Dallas-Fort Worth Metroplex, I write contemporary and historical romance. Current works in progress include the Texas Code Series. I am a member of RWA and Yellow Rose RWA.
View all posts by Carra Copelin →
This entry was posted in Uncategorized and tagged flags, Goliad, independence, Texas. Bookmark the permalink.

What do you think? Cancel reply